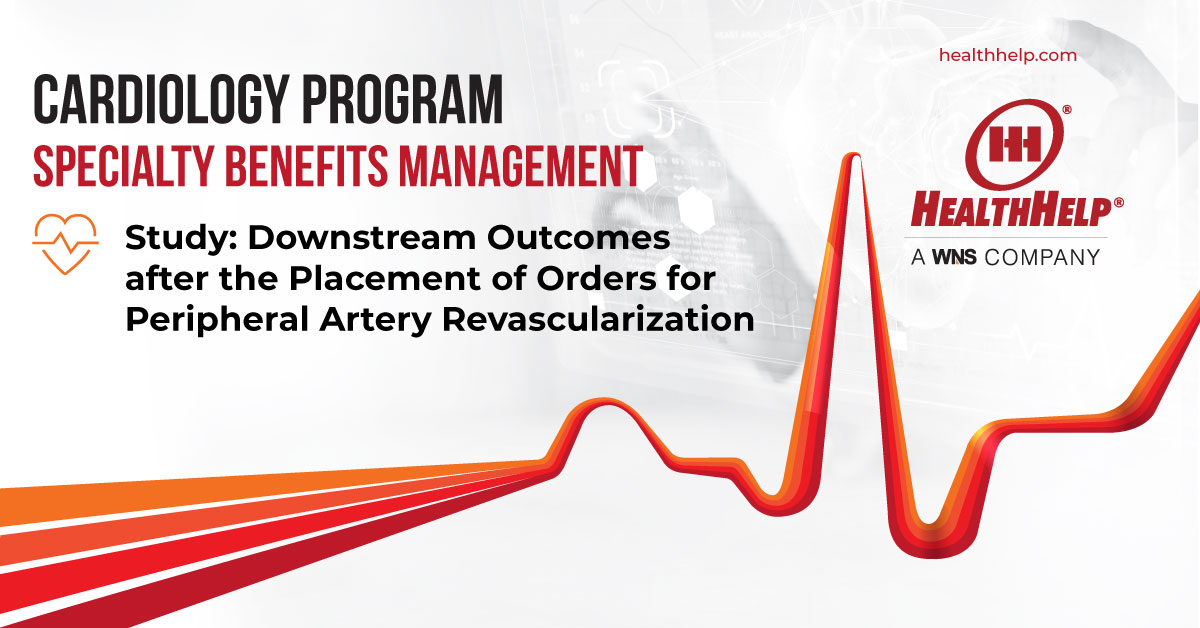 Study: Downstream Outcomes after the Placement of Orders for Peripheral Artery Revascularization

An abstract titled, “Downstream Outcomes after the Placement of Orders for Peripheral Artery Revascularization” has been presented at the 2021 New Cardiovascular Horizons Annual Conference, which was held in New Orleans, Louisiana from June 1st through 4th. The study was produced by the ongoing outcomes research collaboration between HealthHelp and Humana.

Peripheral artery disease (PAD) is common in older individuals, and impacts more than 20% of people over the age of 80. PAD can limit physical activity and significantly reduce quality of life, as it can cause intermittent claudication (IC). There are multiple ways in which PAD can be addressed, including exercise, medication, and surgical revascularization.

Several professional societies recommend that nonsurgical approaches to resolving PAD be attempted, as there are risks to surgery. Patients that have peripheral artery revascularization (PAR) in some instances may develop surgical site infections. Consequently, a nondenial prior authorization program recommends that PAR orders be reconsidered when patients may be able to attempt other approaches.

After a nondenial prior authorization program evaluates orders for PAR, ordering physicians sometimes opt to withdraw their orders based upon the recommendations made by the program. PAR orders are withdrawn as patients may be able to resolve their claudication through unsupervised or supervised exercise rather than PAR. Some patients with withdrawn orders ultimately receive PAR if claudication does not resolve. To characterize patient outcomes under this program, the researchers evaluated whether associations existed between the withdrawal of patients’ initial PAR orders and the presence of claims for PAR and claims mentioning IC in the 16 weeks following the order.

The study used data relating to PAR orders that were placed between January 1st 2019 and September 30th, 2019, and related to patients with commercial and Medicare Advantage health plans. Orders were excluded if they pertained to patients who had a prior PAR order during the period, were not aged 18-89, had acute limb ischemia, had no claudication, had a PAR claim in the prior sixteen weeks, were not continuously enrolled in their health plan for 16 weeks following their PAR order, or did not have angiography in the 16 weeks preceding or following their order. Claims data from 0-16 weeks following the order were reviewed to determine if patients had downstream PAR claims, or if they had emergency department or hospital claims mentioning IC. Chi-square tests were used to assess the association between order withdrawal and downstream receipt of PAR and claims mentioning IC. Multivariate logistic regressions were run to assess the above associations, after controlling for patient age, gender, urbanicity, local median income, state obesity rate, type of PAR ordered, specialty of the ordering physician, and whether PAR was ordered in a hospital setting.

In response to the study’s findings, the study’s lead author, Adam C. Powell, Ph.D., remarked, “Peripheral artery disease is a common condition. Several professional societies have recommended that nonsurgical approaches to remedying it be pursued before revascularization is performed. HealthHelp and Humana work to implement this guidance through nondenial prior authorization. Our findings show that patients that did not have their initial PAR orders authorized during the prior authorization process were no more likely to experience intermittent claudication in the following sixteen weeks than were patients whose PAR orders were approved.”

Do you want to be notified every time HealthHelp adds a new event or post? Subscribe below.
We use cookies to ensure that we give you the best experience on our website. If you continue to use this site we will assume that you are happy with it.Allow Cookies